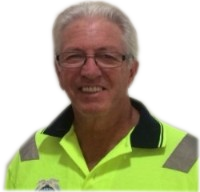 Activations for the year to date, excluding training, have actually slowed down a bit – not necessarily a bad thing – and sit at 101 compared to 91 for the same period last year, running at about a 12% increase. That is already on top of a 40% increase last year, and in comparison to 2017, the increase is 64%. October has produced 9 activations so far compared to 14 for the whole month last year, the first time for a number of months that this has been the case. We have done 35 medivacs so far this year compared to 24 for the same period last year.

VMR2 has arrived! We are in the final stages before it goes into service. The SMS, Risk Register and Assessments have been submitted to AMSA for review before we finalise them. Issues with the original Certificate of Survey have now been resolved, in particular a 30 knot service speed restriction and possible requirements to have to tether crew to the boat under way, and MOB alerts. A second VHF has been installed, and by the middle of next month it should have Radar, AIS and tow lights fitted. 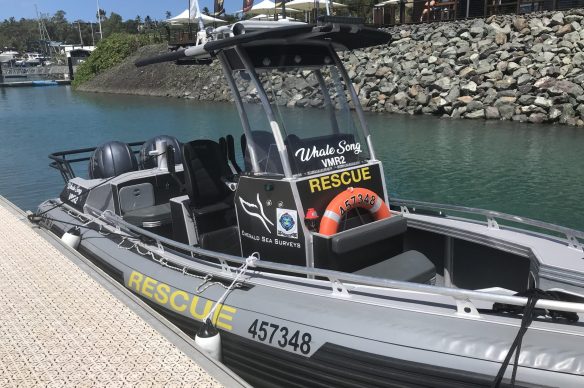 Inductions have already begun and will continue until all crew have been through that process. Skippers in particular will receive on board training and familiarisation before the boat is fully operational. Everyone who has seen it or been out on the water on it has been suitably impressed. 😊

The AIS station on Whitsunday Island should have been fully functional by the end of the month however this will now be moved to early next month. When the chopper reached Mt Robison there was considerable low cloud so the installation was postponed. When all is up and running we will be conducting training sessions for any interested parties.

Our Facebook post last month criticizing a marketing company fundraising in VMR areas for Coastguard had over 16,000 views, with a lot of comments very critical of the activity which was taking funds raised locally out of the community. After a lot of pressure and criticism, they withdrew from the area and agreed not to operate in VMR squadron areas.

The History project has been on hold but that will be getting wound up again in coming weeks after we get VMR2 fully operational. Any further assistance that anyone may wish to offer would be most appreciated, so please contact me if you wish to take part in this interesting project.

After being unable to resolve continual problems with the Simrad autopilot system on Coral Sea Marina VMR1, they have now been returned for credit and compatible Furuno autopilots will be installed.

On November 2nd we participated in the Safety on Water Expo at Coral Sea Marina. As well as having both of our boats on display, we officially named our new rescue RHIB…. ‘Whale Song VMR2’ and welcomed our new naming-rights sponsor,  Emerald Sea Surveys.

Not heard of Emerald Sea Surveys? 🙂

Emerald Sea Surveys is a small vessel management company based in Australia, servicing the science, oil and gas and Defence industries. Ocean awareness, safety and conservation are key drivers for its founders, Curt Jenner AM and Micheline Jenner AM, who have recently been appointed as Members of the Order of Australia for their “significant contribution to conservation and the environment, particularly whale research in Western Australia”.

The Jenner’s are both Master Mariners, having sailed over 150,000 nautical miles around the world on their various vessels. Safety has always been paramount in the Jenner’s lives and their two daughters, Micah, a 200 tonne Master, and Tasmin, a PADI Dive Instructor, are also focused on ocean-based careers.

Contributing to the Whitsunday VMR Group is a natural fit for this family company who now call Shute Harbour home.

Whale Song VMR2 has arrived at her new home

“Gently…gently…..” said President Mal as Whale Song VMR2 arrived in Airlie Beach and was taken off the truck.  He needn’t have been concerned as Hawkes Boatyard had the transfer well in hand.

Do you wear your lifejacket? Of course you do!

Like wearing seatbelts in vehicles, wearing lifejackets in boats is proven to save lives.  And yet we see too much tragedy continuing to occur because, when things go suddenly wrong on the water, people are not wearing their lifejackets.

It can be too late to think about putting on a lifejacket when you find yourself in the water because you’ve fallen overboard or your boat has capsized. If you can’t reach your lifejacket it can’t save you, and even if you can reach it you’ll struggle to put it on in the water.

Don’t let that be you or your family! VMR crew ALWAYS wear lifejackets.

Ever thought “I’d like to circumnavigate Australia in my boat”? Here’s a video of a man who did just that….and he admits to lots of mistakes, like going around the wrong way!

‘Book My Boat’ – a boating version of Air B&B

Does your boat sit idle because you are away…or you have to work…or you just don’t get out on it that often? Do you wish it would earn a little something to help pay for those onerous ownership costs? Book my Boat is a newcomer to the Australian ‘gig economy’.  Owners can rest assured that it is fully insured and they maintain full control over who can rent it. More info HERE.

New software for our Furuno – and we are the first!

Exciting news that will help us in search and rescue activations! Furuno have just released upgraded software that allows easy generation of search patterns on our Furuno plotters as fitted to both our existing boat Coral Sea Marina VMR1 as well as our RHIB Whale Song VMR2.  We are the first in the southern hemisphere to get it!!!

In a full blown search scenario, the software will make it easier and faster to set up and follow one of three search patterns; expanding square, sector, and creeping line. It is apparently very easy to use, so we will be getting skippers and crew up to speed as soon as we can – at the same time hoping that we don’t have to put it to the test!

Your FREE ‘I’m out boating’ card

Compliments of MSQ, you can download your own copy of this card (opens as a PDF).  Add a photo of your boat and give it to a friend, neighbour or relative when you go out boating.  If you go missing, it might make all the difference.

Fish D’Vine and the Rum Bar is the Premier Seafood restaurant in Airlie Beach. They have been a sponsor of VMR Whitsunday since 2016 and have confirmed their renewal as a Silver sponsor for another year. Community minded organisations like Fish D’Vine are the life-blood of our small town and without their help we would not be able to maintain our Marine Safety Net with the latest equipment to service the Marine and Island communities and general public to the highest standards.

They have a VMR Members deal at the moment of 10% of your total bill, but you MUST produce your VMR membership card. It doesn’t matter whether you are member or not though – head to Fish D’Vine and the Rum Bar for the best Rum collection and Seafood in Airlie Beach. 😋

Congratulations to them for taking out the Silver award at The 2019 Whitsunday Tourism awards for Tourism Restaurants and Catering Services. We were also to delighted hear that they seriously getting into the Wedding Catering business and are now the new owners of The Wedding Planners Whitsundays.

Thanks Kevin, Bec and Grant for your ongoing support.

Situational Awareness…and how it applies on boats

“Situational awareness  is the perception of environmental elements and events with respect to time or space, the comprehension of their meaning, and the projection of their future status.” (Wikipedia)

That sounds way more complicated than it is. 😂 Basically it means to perceive what is happening around you, understand it then use this to think ahead. From a boating perspective, here’s how you can develop your own skills in this area:

The latest edition of the Mariner’s Handbook for Australian Waters is now available online. Edition five contains a new chapter on interpreting the accuracy of depth information in Electronic Navigational Charts. It can be purchased from chart distribution agents or you can download a free digital PDF version.

Give the Barramundi a break

Fisheries Queensland have announced that throughout the Queensland east coast, a closed season applies to Barramundi from 1 November 2019 to 31 January 2020 .

Windy: A great App for weather

Windy is a great tool for weather forecast visualization.If you don’t like looking at tables, Windy offers an explosion of colour instead.

The visualisation, which includes streaming wind indicators, makes picking bad weather easy, and sliders help users scroll through data that runs up to a week ahead. Depending on how much information you need, users can choose from more than 30 data sets that includes sea temperatures, wave directions and currents. Best of all, it’s entirely free…so no ads.

Available for IOS or Android

Traditional Winches (such as Windless Winches) generally operate by feeding the chain through the head of the winch and dropping the chain down into an anchor locker. This can potentially cause issues such as tangles in the chain. Drum winches might offer another solution – this video explains……

Thank you everyone!! Next time you’re out and about and see a tin, drop your shrapnel in as it makes a world of difference to the kind of service we are able to provide.

We would also like to acknowledge the ongoing monthly donations made by Adrian Studt and Jeff Knight. Very much appreciated.

One new notice to mariners has been added to the Queensland Transport Website for our region since the last Samson Post. This is:

Get out your diary. November’s VMR Social Meeting will be on: Monday 4th at 6:15pm.

These ‘meetings’ always begin with an informal social time involving drinks around the bar and grilled sausages on the BBQ with salad ($3 ea). It’s a really good opportunity to chat to VMR members and crew.  Once we’ve finished with the food we have a short meeting to talk about ‘what’s going on’.

You don’t need to book or let anyone know you’re coming…grab your better half and just turn up! It’s a great opportunity to socialise with your VMR volunteers and find out what is happening in ‘VMR Land’. 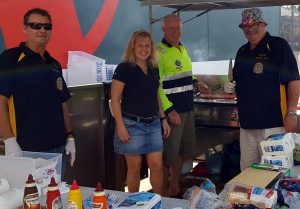 Our Sausage Sizzles are a great fundraiser for us….and with a new boat to fit out, we need to sizzle a lot of sausages! The last one turned over a profit of about $650 which was great! We sold 32Kg of sausages, so thanks everyone who came along and bought a sausage or two.

Our next Bunnings Sausage Sizzle will be Saturday, 30th November so come along and help us out again.

This event is getting bigger and bigger!  There is a Welcome Event on Sunday 12 January 2020 at Airlie Beach.  This is a free event for all and will feature live music, children’s art and craft, food stalls and fireworks!!!  Other events are ticketed including the Rodeo by the Reef on Saturday 18 January 2020 at Bowen.  This will feature a professional bull riding competition with music, food stalls and children’s amusements. Click on the image to download the full brochure of activities as there are too many to list here. 🙂

That’s it for this month’s Samson Post…unless you haven’t read the Activations yet in which case, click on the link or the image below to read about the action.