Activation Reports brought to you by Abell Point Marina

The crew was assembled and ready on the boat for us to leave APM at 1505.  The day was picture perfect ‘winter’ Whitsundays.  We arrived at the vessel at 1530 and it was in tow using Tom’s Hook within a couple of minutes, and travelled back to APM at 3900rpm at 12 knots, with average fuel usage at 112 litres/hr.

We put him alongside to do the necessary paper work, and then took him to the public boat ramp.  He was going to refuel and go back out and catch a few more fish – he wasn’t going to let this little hiccup ruin this perfect day.

We proceeded to refuel VMR1, notified Bill and Hay Point VTS of our safe return while going back to our pen, and arrived back by 1535.

A hassle free pleasant Friday afternoon with a competent crew to make it look easy.

After contacting the vessel and VMR Mackay, I spoke to the water police, who were also activating, and was told to go to the government marine jetty and pick up fire officers.

With Roger and Michel on board we departed our jetty at 1055 and picked up three fire officers and a fire pump and headed off to find the vessel burning south of Almora Islet.

We checked with the water police, who had the owners on board, that the gas bottles on board had gone off before attending the fire and after quite some time spraying water on the vessel, we managed to get a small heaving line attached and started towing the vessel to the shore line. 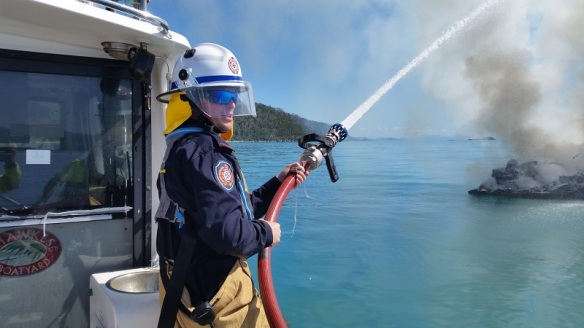 A bow wave from a passing vessel snapped the small line so the water police used our tender anchor as a grappling hook and attached an anchor line and towed the vessel into to the small bay west of Almora Islet where it eventually sank.

The owners and their tender were transferred to our vessel and we returned to APM at 1300.

Ed Note:  This incident was also well publicised on social media and the Whitsunday Times

A neat 35 ft yacht had rung ahead for a tow into the marina.

They had lost a starter motor, and were unable to start their engine at Chance Bay, so they sailed back and anchored outside the marina.

We  consulted the owner and came up with a plan to get the vessel into its berth.

While the conditions seemed perfect, the full moon meant a very low tide, and the berth was around the back on the far side.

We hipped up following our plan perfectly, raised the anchor and proceeded into the marina.

Although very tight and shallow it all went to plan, and came off without incident.

It took less than hour, and we used only 7 litres of fuel.

Bill called for a Medivac off a boat with black sail covers just North West of the outer green marker outside APM.  A male with chest pains.

The Paramedics were already at the boat when I arrived and started the checks.  Roger arrived shortly after and took over.

Because of the urgency we departed quickly and headed out.  We checked all of the boats with any black on them between west and north of the outer Starboard Lateral and couldn’t find the boat.

Let’s try the radio; he was supposed to be standing by on Ch 80??  Nothing, try NE, nothing. Try 81/82, nothing.   I wonder if it’s Port of Airlie. Nothing at all anywhere near the outer laterals.

Phone calls to Bill and the Medics calling their base resulting in a phone number.  Our target was indeed outside APM but near the western rock wall well SW of the outer Stb’d lateral.

We were alongside in a jiff and as the gentleman was still a little mobile transferred quickly to VMR1 so the Paramedic could assess him.  After the assessment we went straight to our pen to disembark the passengers.

I don’t know what we can do about getting much more accurate positions.  The time delay finding the patient could easily have been critical.

Thanks Roger, you were kept quite busy and coped well.  Hope the finger heals quickly.

I received a call late in the afternoon that a kayaker was missing somewhere between Curlew Beach in Marcona Inlet and Dugong Beach in Cid Harbour.

The person was with a group but had split up and had not been seen since 1.00 pm and had not returned to base.

The water police had activated and asked VMR to activate so we departed APM at 1725 and headed towards Marcona Inlet.

We were only out in Pioneer bay when we received a message that the police had found the person so we returned to APM and fuelled up as the tanks were on 800 litres, and berthed at 1815.

I was just settling in to watch the Cowboys/Rabbitohs NRL game when Tom (at the Radio Room) rang looking for a crew to assist a VMRW members in his 7m runabout with 4 people on board. A beautiful Whitsunday Sunday afternoon meant everyone was out enjoying themselves, so he had tried at least 15 people before he had a crew for this activation.

VMR1 left APM at 1635.  We had a description of where the vessel was (just past Daydream Island) and coordinates to navigate to.  Both of these bits of information were not accurate or even close.  (Note: if you seek assistance, endeavour to get the information on your position as precise and accurate as possible!)

After much fruitless searching in the wrong vicinity, we finally established where they were (via the mobile phone) and rapidly got to them and had them in tow by 1710 hrs. We towed them back to APM at approx 9 knots and dropped them off at the public jetty.

We were refuelled, signed off with Hay Point VTS and our 24/7 Phone Holder (Bill) and back in our pen by 1805 hrs.

Got the call from Bill, just before the News came on. A chap anchored in Nara had made a confusing call for assistance and the paramedics had been called in.

We picked up the medic at the fuel dock and left APM at 1930 with 5 POB. The conditions were perfect except that there was no Moon. It was so flat you could hear the bow wave hitting the water.

We arrived at Nara at 2035 to see the inlet filled with white lights. Fortunately our target was travelling with another boat and one of the crew from the other boat was on board and able to signal as we approached.

Our medic transferred for the assessment then the patient transferred to us for a trip to the hospital.

We departed Nara at 2055 leaving Bob from the other boat to sort the 2 boats out. Trev drove us home arriving at APM to disembark our passengers at 2145, refuel, and on to the pen for 2215.

PS: The patient was in good spirits when he left us and gave VMR a nice donation.

Still had problems with the RADAR; didn’t seem to have much range.  I wasn’t able to have a fiddle to try to improve things.

The deck head light above the chart table was fairly weak and generating heat so I think there is a little too much resistance there.

Must be time for a new boat!