Activation Reports brought to you by Fish d’Vine & Rum Bar

I received a call from a member who had blown an engine on his 10 metre cruiser with 4 POB located between Airlie and Double Cone Islands.

I called base to organise a crew while I went to prepare VMR1.  Crewed up and checks completed, we departed APM at 1100 and proceeded to the vessel on a fine day and
a flat sea.

We took it in tow at 7 knots, returned to APM, placed it into its berth and were finished at 1210.

A straight forward activation without hassles so thanks to the crew.

Problems between the Radio Room and phone holder phones caused a little confusion with Cap’t Ray going to the radio room to try to sort it out whilst Gai, in the Radio Room, organised the crew.

A Jetski was having fuel problems at Grimstone Point, opposite Mandalay House, or so we were told!!

We set off for Grimstone at 1545. Three quarters of the way there we got a call on Ch16 from Jetski Tours saying that our jetski was on the beach, just south of Bluff Point!!!

The tour leader kindly towed our ski off the beach and into deeper water for us where we got them in tow.  The 2 people on board transferred to VMR1.

Sensibly the ski owner didn’t have any ID, cards or wallet with them so paperwork, including the Jetski disclaimer, was difficult to complete.

The tide was almost out so returning them to Whisper Bay wasn’t an option.  In the end we put the ski alongside the APM ramp and Stu drove the owner to Whisper Bay and their car to finish the paperwork.

In the meantime Norbert and I returned to the pen and signed off at 1645.

As it was only a short tow and the difference between 8 and 16 knots would be 5 mins, we kept the speed down to minimise any chance of damage. The promised Jetski Towing Tarp has yet to be designed and made.

Margo called to say there was a member in a 6.5 metre cruiser with 2 POB which had broken down at Blue Pearl bay so I proceeded to the marina while she organised a crew.

As we departed APM at 1500 we lost the port side motor so we pulled over to a clear area to find the problem which appeared to be electrical.

After checking the battery and starting switch, we removed the engine cowling and checked the small fuses but it was a little rollie to remove the little screws from the large 100 amp main fuse so I decided to return to the public jetty.

I tried to call the engine dealers but could not get them but luckily there are spare fuses inside the engine cowling and after replacing the 100 amp main fuse the engine started OK.

We departed APM  again and made our way to Blue Pearl Bay and proceeded to tow the vessel back at 10 knots where we placed it onto it’s mooring.

On the way to the vessel we had received a message that another vessel had broken down at Whitehaven Beach so we headed off again.

PS:  When I got home I tested the fuse with a multimeter and it is OK??? Maybe it was a poor contact or after shutting off all power the electronics rebooted.

After completing the activation to Blue Pearl Bay, we again left APM at 1835.

We made our way to Whitehaven Beach to rendezvous with a 5.5 metre cruiser with engine problems and two POB.

With a moderate sea we arrived at 2000, took the vessel under tow and were able to get it up on the plane and maintain a speed of 16 knots.

After dropping them of at Port of Airlie boat ramp we returned to APM, refuelled, washed VMR1, return to our berth and was finished at 2245.

My thanks to Wendy, John and Lance for a long day out on the water.

David Cooper rang from the base at 0750 looking for a crew.

VMR1 left APM at 0820 in semi reasonable conditions, despite the dire warnings of a possible cyclone heading our way. 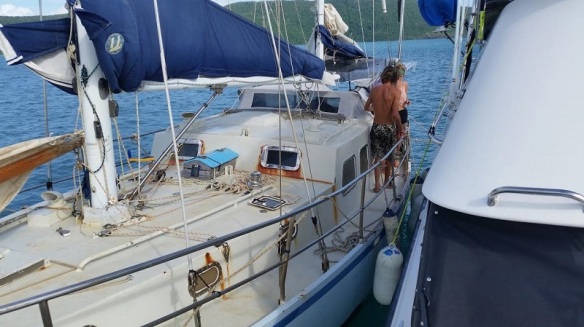 The 41’ Ketch was anchored in the middle of Woodwark Bay when we arrived at 0850.  It took a while for them to raise their anchor, and then we were towing them by 0910.

We towed them at a steady 7.2 knots back to the entrance of APM where we rafted them alongside and took them into APM and deposited them at the public jetty.

We ‘signed off’ with Hay Point VTS  and David (on the radios at the base) and were refuelled and were back safely in our pen at 1050 hrs.

A job well done crew – thanks – made everything look easy.

Received a call from the radio room that a member who was on a mooring outside the marina was trying to bring his boat into the marina ahead off the approaching cyclone.

However, he could not start his engine so we departed APM at 1400 hrs and went out the boat.

We rafted up and I tried unsuccessfully to start the engine so we towed it to a berth in the marina.