Activation Reports brought to you by Fish d’Vine & Rum Bar

I received a call on Friday afternoon that a bare boat “power cat” had broken down off Sandy Beach on South Molle Island.

Along with our crew, we also had State Training Officer Tom Hudson aboard, and we departed APM at 1645.

We found the vessel drifting with all the anchor chain down in the Molle Channel, where it was blowing 30 knots with wind against tide.  It took the vessel a long time to get their anchor up as they were laying side on to the wind and waves, but when they had finally retrieved the anchor, I made a pass for my crew to throw a heaving line to them.

Unfortunately, Murphy’s Law resulted in the slack in the heaving line wrap around our propeller.  Now we had a situation where the other vessel was drifting and we were unravelling rope off our prop, but fortunately we were safely offshore.

We did another pass and by using a fender on the tow rope which was picked up with a boat hook, we were finally able to take the vessel under tow.

It was a slow tow back into APM and it was still blowing strongly, we had some difficulty rafting up but were lucky enough to have a whole pen to park the vessel and ourselves into.

After doing the paperwork and fuelling up we were finished at 2015.

While carrying out boat training in Funnel Bay, I received a phone call from Bill.  A 30 ft Kevla Cat with 6 POB was overdue at its destination and I was asked to put out a radio call out to the vessel.  I then let Bill know that I could not receive a reply.

At 1730 I was informed that the police requested us to travel to Whitehaven Beach via Hook Passage.  As we were in the middle of the Whitsunday Passage we heard radio calls indicating that the vessel and passengers were accounted for.

We soon received a call to stand down, which gave us just enough time to return to APM by 1850 and home in time for the Cowboys football game.

Editor’s Note:  This was a skippered charter.  The skipper anchored with a short chain, not allowing for tidal fall and was grounded until they floated off on the next high tide.

Note to all boat skippers – the profile of Whitehaven Beach and Hill Inlet has altered due to Severe Tropical Cyclone Debbie. Whitehaven now as a much flatter profile, following erosion of coastal dunes into the bay.  Take care when setting anchor to avoid this happening to you.

Got the call from Bill at 1100.  A 40 ft sailing boat had lost its engine and needed a tow into APM.  They would be outside the Marina in 2 hours.

At 1130 Bill called to say the boat was early so as I needed a lift, he took me to the marina.

It was a perfect day as we went alongside a nice looking Ovni Aluminium Circumnavigator then proceeded on to M arm.

All went perfectly and the yacht was in its pen by 1215.

Thanks to the crew for a professional job.

PS:  Initially APM refused them entry to the Marina as their engine had failed!!

On this wet Friday morning, our vessel (VMR1) was involved with training for the Whitsunday Training Academy and had a tutor and 3 students aboard.

The rest of the VMRW crew arrived and we were out of APM by 1025.  This was also going to be good ‘on the spot’ training (by observation only) for the Academy students – towing being a part of a Coxswains course.  I hope they enjoyed it.

Seas were reasonable, considering the wind and rain being experienced.  We arrived at the vessel at 1050, and had her in tow by 1055, thanks to an efficient and slick VMRW crew. 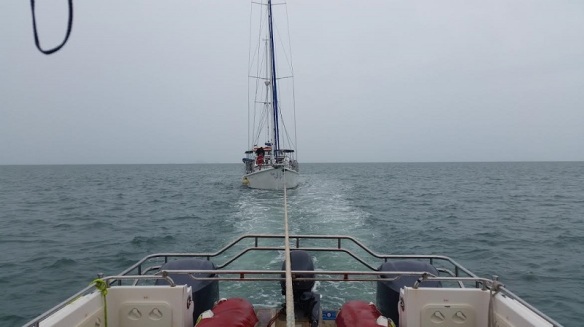 We towed her back to APM at 6.5 knots, shortening the tow line while entering the Marina, and put her alongside while in the Marina itself.

This vessel was almost double our length – and at 43 tonnes was 5 to 6 times our weight – so momentum is a major concern when manoeuvring.  We took her to her allocated berth with no incidents, immediately refuelled, and after reporting our safe return to Hay Point VTS and to Bill, were back in our own pen by 1255.

As always – thanks to the crew for making it look easy.

Saturday, another ‘perfect day in Paradise’ and I was just about to have lunch, when Gay Bowden in the radio room rang looking for a skipper – others she had tried were obviously out enjoying our beautiful part of the world.

VMR1, its crew and two paramedics, Boyd and Natasha, left APM at 1310 with Roger on the helm.  We were alongside Hamilton’s Marina at 1415.

The paramedics departed our vessel to do their assessment, and duly had the patient with one companion on board by 1510.

Rod took the helm for the return to APM.  We were unloaded, signed off with Hay Point VTS and our base, and back in our pen by 1630.

PS:  Hopefully manoeuvring a patient on a stretcher onto the new boat will be a lot easier than at present!

The phone holder got the call from Shane at Queensland Yacht Charters at 1625. One of their fleet had contaminated fuel and had stopped between False Nara Inlet and Caves Cove.

Steve Smith, the mechanic, was out there in QYC’s chase boat but was unable to get the motor going, so he had the charter boat under tow and was making slow progress towards APM.

We departed APM 1645.  Beautiful clear skies, warm, flat and little wind.  Jock got us there by 1730 and, as there was a bit of a chop on the beam, we used Steve to ferry the tow and Jock to the stricken vessel.

We had to sacrifice Jock as we were unsure how well the charterers would be able to secure the tow.  All went well so we left Jock with the charterers and we were off to APM at 1740.  Steve stayed with us for a short while in case of problems then shot through for his dinner.

With Michel on the helm and keeping it steady steady at 3300 rpm and 8.5 knots, saw us at APM 1915.  It was a new moon and very dark but we got the boat alongside then proceeded to O arm where Shane was waiting.  A little bit of shuffle had them in the pen and us off to re-fuel.

Back in the pen for 1935 and many thanks to the slick crew.  The phone holder was notified to get my dinner on.

Any plans to hold a drills and training exercise went out the window when Celia called just after 0700 for an activation to retrieve a member in a 5.3m vessel with a flat battery 100 metres off Baird Point at the north western end of Hook Island, near Stonehaven.

VMR1 departed Abell Point at 0745 and were off Baird Point 45 minutes later.

Uh-oh! No vessel in sight!  After a couple of phone calls (their radio was out due to the flat battery) we headed south and finally located them about 15 minutes later over 2 miles away, nearly at Nara.

Lesson – make sure you are where you think you are when you report a location – even better give us a GPS lat/long location!

We passed over our portable power pack to see if that would provide the necessary grunt to get the motor started, and that was successful.  Mick was transferred across to complete the necessary paperwork before the other vessel made its own way back to Hamilton Island while VMR1 returned to Abell Point at 0945, just in time for Ray to take over and carry out the drills training that I was originally slotted in for – thanks Ray.

Thanks also to Mick, Rod and Tim for their time and assistance.

Celia, our on duty 24/7 phone holder, rang at 1206 looking for a crew.  She was having information relayed from the vessel needing our assistance via Hay Point VTS.  The boat had no mobile phone reception as it was behind part of Hook Island.

We left APM at 1240 and located the 18 ft tinny with 5 POB onshore at the old Hook Island Resort.

We sent our tender in to tow the vessel out to VMR1, but this proved unnecessary as they managed to get their motor running long enough to come out to VMR1, waiting 100 metres offshore.  We transferred all 5 people onto VMR1 in the calm waters of Hook Passage, our tender back on board VMR1, and the other vessel under tow by 1350.

Towing the boat at approx 16.5 knots to Shute Harbour (via Unsafe Passage), we had them dropped off at the public boat ramp by 1450.

We were refuelled, washed down and, after informing Hay Point VTS and Celia of our safe return, back in our pen in APM by 1540.