April’s Activation Reports brought to you by
ABELL POINT MARINA

I (Mal) heard the “Help” ringtone as 24/7 phone holder Celia Smith rang me just after 1800. The Police had activated us to search for a swimmer following a 000 call from his partner advising that he had not returned from a swim or snorkel at Coral Beach, just around the corner from Shute Harbour.

Abell Point Marina VMR1 departed the marina at 1830 and made best speed around Pioneer Point to Coral Beach in south east winds of 29 to 34 knots and very choppy seas with typical Whitsundays wind against tide conditions. 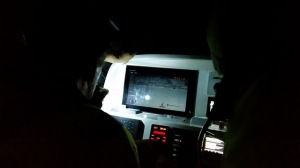 The crew were using our Infrared Camera (FLIR), spotlights and big torches as we rounded Pioneer Point. We retraced our course for a short while to check a possible sighting, then resumed our trip to Coral Beach. As the tide had turned about two hours earlier we searched unsuccessfully as far as Coral point before retracing our route and searching with FLIR, spotlights and torches.

As we passed Swamp Bay a faint light was seen intermittently on shore, and the decision was made to deploy our rescue tender to have a closer look. When the tender got closer to the beach a person was seen on FLIR walking down to meet the tender,  a quick radio call between the tender and VMR1 confirmed that they did not need assistance, and after asking them to keep an eye out for the missing swimmer and to call 000 if anything was seen, we recovered the tender and continued north toward Almora Islet.

Then, less than a mile away we heard someone calling out on our starboard side. I reduced power and the crew went to check. I heard one of them say “there is a guy in the water!”   We quickly turned and made our way back to the man, who understandably was waving frantically. As we came alongside he was able to swim closer but he did not have the strength to pull himself on board (a task that was well handled by the crew in difficult conditions). He lay on the deck of the cockpit for a few minutes, clearly exhausted.

After confirming his name we were able to advise the Police that he had been located, and were on our way back to Abell Point  with the crew looking after him, getting him warm and giving him water to drink. We had requested an ambulance to be available upon our return, and QAS and Police were waiting to help us dock at the public jetty. After a check-up by the paramedics, he was able to walk slowly to the waiting ambulance for transport to Proserpine Hospital.

After refuelling and a washdown VMR1 was secured and ready for the next activation.

Great job by all crew on an activation that could easily have had a very different ending, and was startlingly similar to the rescue off 1770 in October.

The call came in at 3.20am from the Queensland Ambulance Service in Rockhampton. A heavily pregnant woman needed to get to Proserpine Hospital *promptly*…and no prizes for guessing what that meant. 🙂
I (Geoff) arrived at ‘Abell Point Marina VMR1’ and met the other crew, got organised, loaded the Paramedics on board and were on our way by 3.55am. (By the way, thanks to all the volunteer crew who are adding their availability to our My Emergency Crew system….the Phone Holder got a positive response from the first three people she rang!)

On the way out of the marina we noted the Starboard Lateral on the southern groin was out. The night was black….black as the inside of a cow but thank to Mrs God and our up to date Navigation Aids we were able to make good speed.
It certainly didn’t help though when we went through a very heavy shower going past Pioneer Rocks and everything got soaked, including me. No screen or deflector to duck behind. Bugger. 💦🌧
All went well after the shower although the Port Lateral at Unsafe Passage was out causing a little more confusion. Which way does the flood tide officially run through Unsafe? (East to West). 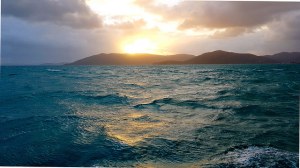 We arrived at Hammo at 5.00am and everyone was ready. A quick turn round saw us on our way home in a few minutes. A delightful, smooth, uneventful trip home with the dawn slowly rising made the whole thing worthwhile. That’s why they pay us the big bucks.😁
The Fuel dock is still under repair so we dropped the passengers at the Public Wharf at 6.00am with Michel helping them up the ramp with all their gear. Luckily we didn’t get an extra passenger arrive on the way!
Then fuelled up and back in the pen by 6.20am. Thanks to a great crew. It makes a job easy.
Crew: Michel del Aguila, Ken Bryce, Andrew Gray

A couple were sitting on their patio in Cannonvale when they noticed an orange smoke flare in the direction of Double Cone Island. Not sure what to do, they PM’d the VMR Facebook Page and by chance, President Mal Priday was online at the time. Mal suggested that they report the sighting to the Police. (Note: This is always the right thing to do).

I (Ray) received the call from Bill the 24/7 phone holder that we had been activated to search the area, so with a crew of Stuart , Richard, Kenny and Clayton we departed Abell Point Marina at 8.00pm and headed towards Double Cone Island. We were lucky to have a flat sea and clear starry night which gave us terrific long range vision to carry out the search.

After carrying out a slow search circumnavigating the island using several spotlights ,radar and the infrared FLIR system we reported back to the Police that we were unable to locate anything untoward. We were advised to travel back slowly in the direction of Abell Point Marina using all equipment available.

This we did but still could not find anything to report. Still, better to be safe than sorry! Back in our pen and finished at 10.10pm with my thanks to the crew.

Activation 27/4/18 : Person in inflatable canoe near Pigeon Island, with sharks

At 17.45 I (Mal) received a call from phone holder Bill advising that we had been activated by the Police to look for and assist a person in an inflatable canoe (really?😮) near Pigeon Island. He was reportedly being circled by sharks. OK, no problem, apart from the fact that our vessel, Abell Point Marina VMR1 was in Bowen assisting in a community event (Bowen Superboats).
I asked Bill to call Hamilton Island based Mars Charters to see if they could assist. Earlier in the day I had noticed two of their boats in Abell Point while I was driving in to see if I could get the assistance of any boat just returning to the boat ramp. Bill called back to say that Mars could help with a boat and had found a skipper as well.

Time was of the essence as darkness was fast approaching but I met skipper Chris and crew Ashley as we were all walking down to their boat at the same time. After prestart checks we were underway a little after 1800, heading for Pigeon Island. En route we responded to an “All Ships” from Whitsunday VTS asking any vessels in the area to assist.
North of Pigeon Island, we found – nothing! By this time I was in communication with the Water Police who were in turn talking to our target, and we were told to look for a light from a phone as that was our man. Other Police had gone to the Whisper Bay Ramp near the VMR base trying to get a ride out to look for the target, without success. It was a bit like looking for a needle in a haystack in the near darkness, but after a search we sighted the faint light from what looked like a phone and found our man – without sharks – about ¾ of a mile west of Pigeon Island.
Chris got us as close as we dared in the shallow water, and we asked our man to paddle out a bit to us, and transferred him and his fishing gear (but no lifejacket) onto our boat for the trip back to Abell Point, where he was able to give his report to the Police at about 1900.
Luckily, a happy ending , but it could have been very different in a canoe that was easily blown around even in the light winds prevailing at the time, and in one that looked like it was difficult to paddle as well.

Many thanks to Mars Charters, Chris and Ashley for their willing and able assistance.

The skipper of a 5.4 metre half cabin had broken down in Unsafe Passage and was requiring assistance. He had rang the VMR phone holder Fin, who had passed on my (Mal’s) number. The skipper provided information and advised further that he was safely anchored, and that he was a member. Just one little problem…..Abell Point Marina VMR1 was still in Bowen!

We had arranged coverage of our southern area with VMR Mackay, and in the rest of the area with VMR Midge Point (which was also in Bowen) if required, but it did not make sense to call them all the way from Bowen for what sounded like a relatively easy activation. So it was on the phone to Mars Charters Whitsundays again to see if they could assist. Yes they could, and owner and skipper Broden Warne would be doing the activation from Hamilton Island in another of their

vessels, with an ETA of about 45 minutes to Unsafe.

I received a text from Broden advising me that he had reached Unsafe but no boat was in sight, and he had contacted them and was told that they were actually in Hook Passage! That added about an hour to the planned short activation. They were eventually taken in tow and taken to Shute Harbour, arriving just before midnight. I was there to meet them, and gave the skipper a ride to Funnel Bay to collect his car and trailer, and got home myself about 1230 a.m.

Thanks again to Broden and Mars Charters for his willing assistance – hopefully for the last time this weekend!

BACK TO THE NEWSLETTER