The ringtone I (Mal) use for VMR activations is the Beatles song “HELP”, and when that sounded just before 4:45am I knew something urgent was up. Phone holder Fin advised me that we had been activated by the Water Police to locate a 40 foot yacht in distress in Pioneer Bay. We were told that they were dragging anchor, had shredded sails, engine problems, and while we were given a mobile phone number their VHF may not be working. Conditions at the time were extremely windy, with gusts over 30 knots and short, rough seas of a metre plus, even in Pioneer Bay. 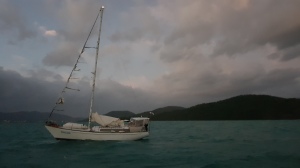 We headed off on ‘Abell Point Marina VMR1’ at about 5:20am, setting course for the last coordinates that we were given. En-route a radar image was picked up well west (over a mile) of that position, and a dim anchor light could be seen in the distance as we turned towards the radar position. As we came alongside at 5:35am we could not see anyone on deck which was a tad surprising as they had called for assistance and should have been expecting us! One blast on our horn – no response. 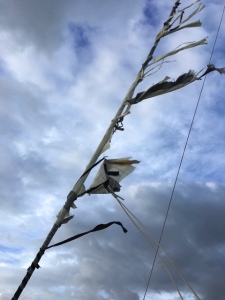 Five blasts, and one person came on deck. We had been unable to raise any response either on VHF or mobile phone (after 30 calls!), and with the very gusty wind and rough seas we had difficulty with any sort of verbal communication.
The skipper eventually moved forward so we could throw him a heaving line attached to our tow line (nice first time throw, Marti) and after a delay he was able to secure the tow line. Holding position on VMR1 was difficult in the prevailing conditions (but much easier than it would have been on our former rescue boat). 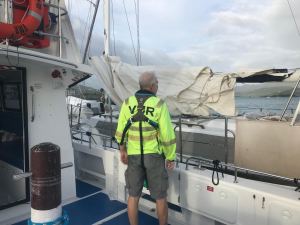 Having instructed the skipper to haul in his anchor once VMR1 had taken the strain, it became apparent that he was unable to do that, so the decision was made at 5:55am to tow the vessel, with the anchor dragging, to safety in smoother waters in the lee of Abell Point, and that was done at 2-3 knots. At that stage we let them drift back slowly until their anchor had taken hold again, asked them to drop the towline, and came alongside to secure them for the transit into the marina. Abell Point Security confirmed for us that there was a vacant berth on the public jetty, so that became our target destination. Next problem was déjà vu….they still could not get their anchor up. After unsuccessfully trying to cut the chain their skipper let it go at the bitter end and abandoned it so we could continue into the marina.
VMR1 was able to reverse them alongside the public jetty where they were secured with the assistance of Abell Point Marina security staff – thanks fellas – and VMR1 returned to its berth for wash-down and shutdown of all systems at 7:30am.
Not a long activation but one of the more difficult ones, well-handled under trying conditions by the crew.
Crew: Roger Wodson, Michel del Aguila, Marti Davey (trainee)

It looks like Friday afternoon and feels the same way, so when my phone rang I (Ron) guessed it would be VMR….and I was right. It was a police activation, just before dusk. So…what do we know? 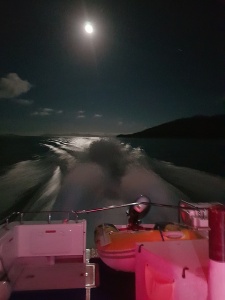 Three people on a jet-ski departed Shute Harbour, headed south for about 30 minutes they think, damaged the water-craft and swam ashore. The Police are not sure if these people are on the mainland, Long Island or Pine Island. Okay so we don’t have much to go on except that it could be a large search area, in the dark for shore based wet people and/or an abandoned jet-ski.
With extra crew on board for the search, we departed our berth on ‘Abell Point Marina VMR1’ at 6.20pm. On route to Long Island we contacted the Police vessel already searching in the vicinity and were tasked to do a shore-line search of the mainland adjacent to Long Island, southwards to Cow and Calf Islands. Good visibility with light winds and a calm sea helped. 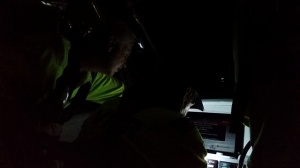 Due to the relatively narrow channel we hugged the western side using spotlights and torches at close range while utilizing our FLIR (Forward Looking Infrared Radiometer) unit to sweep the shore of Long Island. The system proved most effective and we had just picked out a camping party on shore in Anderson Bay as the call came via VHF to stand down as the Police vessel had located our lost adventurers.

Spotlights off, campers back to their nocturnal pursuits, and we returned to Abell Point to refuel and clean-up.
What did we learn? One person with a skillfully managed FLIR can successfully cover as much shoreline at 10 knots as 5 crew with torches and heavy spotlights. The torches did the job tonight, but the FLIR is amazing.  Great work by the crew tonight. We were home and hosed by 8.52pm.
Crew: Stu Applegate, Michel del Aguila, Trevor James, Tim Hearn, Samantha Collins (Trainee) and Graeme Jay (Trainee)

Back to the Newsletter