Activation Reports brought to you by

Phone holder Fin Forbes called me (Mal) at 07:00 to advise that we had been requested to assist a 50 foot long and 36 tonne commercial vessel with 19 people on board. They had starter motor problems, and wanted a tow from Hook passage to Abell Point Marina. 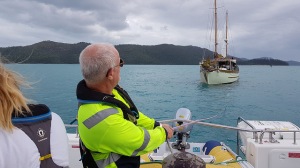 Abell Point Marina VMR1 departed at 07:45, and was alongside the vessel about 08:30 after the trip across Whitsunday Passage in winds of 15-20 knots and moderate conditions, with wind against tide. As their anchor winch was hydraulic and driven by the engine, they had to haul in about 45 metres of chain and anchor by hand while VMR1 took the strain and kept them over their chain, in gusty conditions. That was completed about 09:15, and the tow was under way at about 7.5 knots. Conditions in the passage were a little rollier than on the way out, but generally not too bad. 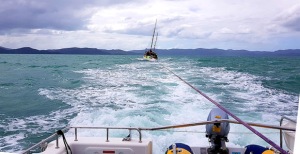 The towed vessel was taken alongside VMR1 off the entrance to Abell Point Marina, and carefully manoeuvred into their allocated pen just before noon.

After refuelling VMR1 was back in its own berth, hosed down and secured by 12:30. Thanks to the crew for their competent assistance with a large, vessel, and VMR1 handled the tow with relative ease considering the size of the towed boat.

The dilemma began with a phone call at 12.15pm from VMR. A perfect afternoon with clear skies, almost no breeze, and a patient with a broken wrist who needed transport back to Airlie beach from Daydream Island. The dilemma was solved about 2 seconds later when I (Ron) put down my shovel, climbed out of the trench I was digging and drove down to Abell Point Marina to begin the pre-start procedures on Abell Point Marina VMR 1. 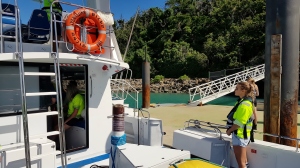 With two of our normal crew, three trainees and an ambulance officer on board we left our dock at 13.05 for a fast trip across Molle Passage. Docking at Daydream was interesting due to the temporary pontoon in place due to Cyclone Debbie, but with good teamwork we had the patient aboard, settled and comfortably dockside in Airlie by 14.10.
Thanks to all crew and back to the trench for me! 🙂
Crew: Stuart Applegate, Michel del Aguila, Karoliina Kunnari, Graeme Jay and Samantha Collins 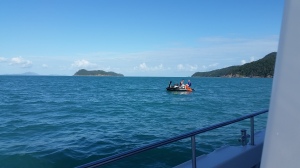 Phone Holder Fin  Forbes received a call a little after 1 pm from a jet ski that had broken down on the western (or was it the eastern…they weren’t sure 😄 ) side of Long Island, and were looking for assistance to get back to Shute Harbour. Fin had called me (Mal) and I was half way into town when he called me back to say that they had cancelled the callout and were trying to make other arrangements – probably because they were non-members and they would have to pay for the callout, as explained to them by Fin. That area does not get a lot of boat traffic as a rule, and 25 minutes later it was all go again, so it was proceed to the boat and get ready to go. Oh well..what could be a better activity on a beautiful day in paradise.

Abell Point Marina VMR1 departed the marina at 2:25, with a slightly choppy sea. After confirming that they could see Hamilton Island and not Australia, we headed down the eastern side of Long Island and saw them off Palm Bay Resort just after 3:00. Interestingly, they were on radar at about 1.5 miles and FLIR at over a mile, even in daylight.

The tow back to Shute was pretty slow, about 7 knots, as some jet-skis are susceptible to having water enter and possibly hydraulic the engine, so caution was the order of the day at the request of the owner. They were deposited on the fishing pontoon at Shute just after 16:00 before VMR1 proceeded back to Abell Point to refuel and return to our usual berth, pride of place on the main arm near the fuel dock, just before 5:00pm.

Thanks to the crew on what was a pretty easy but slow activation.

It is so rewarding to see prudent sea-manship in action. The call came in just after 16.00 Sunday. It was a near new 6 metre vessel but the motor had reverted to “safe mode”. All passengers were well and the vessel was anchored in Nara Inlet, but the forecast for the time was 25 knots plus and the Whitsunday Passage would be pretty harsh.
Our crossing in Abell Point Marina VMR 1 was swift but we met confused 1.5 metre swells and gusts of about 30 knots. Radio contact with the assisted vessel had them weigh anchor and come out to meet us at the entrance to Nara, and they appeared on the plane, out of the rain, motor miraculously working properly, with no repairs done.

We explained the sea-state to their skipper, and he elected to accept our suggestion of transferring 6 of his passengers to the larger VMR and being towed back to Shute Harbour, assuming that his motor would shut down again mid-passage.
Departing Nara, the seas had built, and the going was pretty tough on the little Haines, so our crew suggested we could tow him to Abell Point, better angle to the seas and a shorter towing time, then one of us would drive him to Shute Harbour to pick up his car and trailer. Their skipper agreed, so with two fine decisions made in one activation, we turned for home.
A job well done by our crew….thank you.
Crew: Stuart Applegate, Mitchell Edwards, Dewi Hughes and Tony McNeill
Skipper Ron Roberts

Activation 11/5/18: Assist member outside of Pioneer Rocks
I (Ron) received a call from our temporary 24/7 phone-holder that a member had broken down a short hop from Airlie Beach. After making it all the way to the reef for a fishing outing, they were almost back when the outboard motor decided it didn’t want to go any further. Met the crew at Abell Point Marina VMR1 and it was an easy 25 minute flatwater run to the vessel we were tasked to assist. This on a beautiful sunny 5 knot day.

The vessel was where the owner said it was, he was a member and had been for years but this was his first assist. He later commented “I finally get to use it!” 🙂 As we pulled up along-side, under his hat and sunscreen I recognized their skipper as one of the Ambulance officers who regularly accompanies us on medi-vacs. His boat and trailer were parked at Port of Airlie so our first plan was to head in this direction, however a falling tide soon made that quite risky. VMR1 isn’t supposed to venture into water depth less than 0.9, so when it dropped quickly to 0.7 the decision was made that it probably wasn’t a good thing to start dragging the props into the bottom of the marina. 😃 After a quick discussion with the skipper we were assisting, we gingerly turned around (just dodging a Cruise Whitsundays ferry) and headed for Abell Point Marina.

We had the boat back at the boat-ramp and Abell Point Marina VMR 1 tied up and tidy within 2 hours of the initial call. One of our crew offered to drive the member back to Port of Airlie to pick up the car and trailer….and everyone was happy!

Wish you were there? Check out the video! 😃

Back to the Newsletter