The Emergency Phone Holder, Bill, rang at 15.00. Ryan and Andrew were doing the boat checks when I (Geoff) arrived with Cam just behind me. Doug and Keely from QAS arrived shortly afterwards and Abell Point Marina VMR1 departed at 15.30. I had checked the weather observations at Hamilton before I left home, and it was Easterly, gusting low 30’s. However when we got out there it didn’t feel much above 20 and the seas were OK but, and I know this will surprise everyone, it was raining. Lots!

Because of the rain, we tried opening the front clear about 3/400mm and peering through the bottom gap, it seemed to work OK. The VHF radios had had some work done to them to improve their range so I called Cumberland Charter Yachts for a radio check on ch82 and ch16 and both worked perfectly. (Thanks 2016 Communications)

We got to Hayman at 16.15 and the Paramedics assessed both our patients, one walking and one on a stretcher. We loaded our passengers, one using our stretcher, and headed off at 16.45 allowing the Hayman workers ferry to enter the marina to finally pick up their passengers. 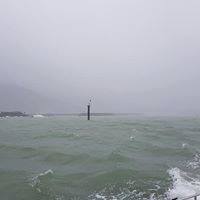 The run back was uneventful, arriving at Abell Point Marina 17.30. We helped get both stretchers from the Ambulance, load everyone and then pull stretchers and Paramedics kit up to the Ambulance. We refuelled, then into the pen for 18.00 for a wash down and to complete the paperwork.

Thanks to the crew for a relaxing day on the water. 😏Another delightful day in the Wetsundays paradise!

For me (Ron), there is still that moment of surprise when the Alert tone I’ve set up for Whitsunday VMR suddenly starts up.  Not sure why…it’s not like it hasn’t happened before. 😀  This time it was 16.40 on a Monday afternoon and I’d just finished work. 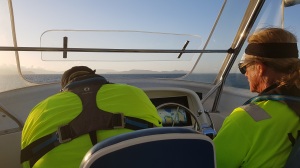 I was informed that it was a Medivac from Hamilton Island so no time to waste. I rushed to Abell Point Marina and while standing next to my car, ripped off the muddy, sweaty work shirt and donned my VMR shirt. (I’ve learned from long experience to keep it in the car).

The crew were wonderful and most of the checks had been done when I arrived, so with 2 Paramedics on board, we left our berth at 17.00. It was a clear night with a light north-easterly breeze so we made good speed and were soon at Dent Passage only 5 minutes from Hammo…..when we got a call to divert to Hayman Island for a second Medivac.

At this point we needed to engage in some rapid radio triage, which led to the decision that we would continue to Hammo and do the Hayman pick-up immediately after. 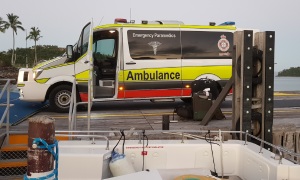 With our first patient aboard, some quick thinking offered a better alternative. The need to provide appropriate care for patient one led us to divert first to Shute Harbour, having arranged a second ambulance to meet us there. A key to the locked remaining pontoon saw the ambulance able to park next to VMR1 for a speedy transfer, and off we went to Hayman Island via Daydream Island and Unsafe Passage. This was definitely the 3 island tour, and no need to buy a ticket. 😀

As we approached Hayman we phoned ahead so number two patient was already being driven down to the pontoon as we made fast to the dock.  It was a very fast and efficient transfer, and off we headed back to Abell Point Marina. 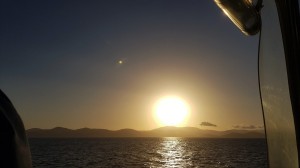 With two separate activations from two islands completed within 4 hours, we had Abell Point Marina VMR1 washed down and refuelled ready for our next activation by 21.00, with only the paperwork left to do.

Great work again from the crew of Ryan and Michel, and thanks to our travelling medico’s Alec and Rhiannon with a flying visit from Leon at Shute Harbour. Well done team!

I (Ray) had arranged to meet Mal Priday at Abell Point Marina VMR1 to carry out some tests at 11.00am.  I was just about to leave home when the phone rang….it was Roger on the 24/7 emergency phone.  Apparently a jetski from Dingo Beach with 2 people on board had broken down in the Whitsunday passage between North Molle and Whitsunday Island. Well…I was heading down to the boat anyway, so why not! 🙂

By the time I arrived Mal had all the checks done so when crew members Nicole and Chris  came aboard we were ready to go.  It was right on 1120 when we left the marina and proceeded to the distressed vessel in flat calm waters.

Rendezvous with the jetski was uneventful – it turned out to be a small SeeDoo jetboat.  We organised the paperwork and the person on the SeeDoo made arrangements to have their trailer brought from Dingo beach to Abell Point Marina, making it a simple task to tow the SeeDoo back to Airlie and deposit it at the boat ramp.

The job was completed and the boat washed down by 1310.  Time for lunch!

It was 20:17 when I (Fin) got the call – I know that’s pretty exact but I looked to see how much of the TV program I would miss. 🙂 It was Roger on the other end of the line, letting me know that we had a member with engine problems, and would I help.  Of course! 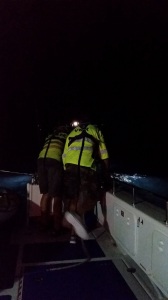 I met Ryan, Ken and Steve at Abell Point Marina VMR1, and we were underway at 2045 hrs, heading for the NE side of Gloucester Island. It was a beautiful evening.  The weather was clear with ½ metre seas and the visibility was superb! We were treated to a full moon which meant night visibility was almost too bright. 😀

Exactly one hour later at 2145 hrs we pulled up next to our member’s vessel, a 5.8 metre Haines half cabin with two people on board. We were towing (at approx.18 knots) by 2155 hrs and dropped them at the APM public ramp.  By 2345 hrs we had VMR1 refuelled, washed down and in the pen.

I thank the crew for carrying out all tasks in a calm, competent and efficient manner.

Someone on Hamilton Island had their peaceful sleep disturbed Sunday night with a medical emergency. Then the Island staff phoned the ambulance service who then called the VMR Whitsunday 24-hour emergency phone holder, who then called me (Ron) and two crew members. Now, what did we do before phones were invented? 😀

Anyway, with that 05:00 call we were all lucky enough to be woken in time to watch the sun rising over Whitsunday Island as we approached Hamilton Island via Dent Passage. 25 knots of South-Easterly and a big tide range had made the crossing a bit boisterous in open water, But Abell Point Marina VMR1 handled it easily.

At that time of the morning there was no other vessel traffic in the marina so we went straight to our pick-up point where the patient was ready to board, and once he was comfortable we settled in for a smoother trip back to base with a following sea and breeze.

A quick wash-down and tidy and VMR1 was ready to go again by 08.00. Thanks to the crew of Michel and Dewi, and our Paramedic Alec, another job well done.

I (Geoff) arrived on Abell Point Marina VMR1 at 16.20 to do the usual Thursday Training, however Capt. Fin greeted me with the news that VTS had rung him (the Emergency Phone Holder and Sarco) to report that a Member’s small tinny had broken down near Bluff Point.  It wasn’t far so we should be able to do the Drills Training as well as the recovery. Happy Days. 🙂

We waited until 16.30 to see if anyone else turned up for training then took off with 8 ‘crew’ into a very occasional, showery afternoon. On the way we checked the target position on our VHF radio and after rounding Bluff Point, we saw the target in position in the SW corner of the bay.

Those of you who know Bluff Point Bay know it is shallow from about ½ way down and our target was almost on the southern shore line. After suggestions from the guys in the tinny we tried the channel but could only get close to ½ way, even given a rising tide – I lost my nerve and stopped VMR1 as we were fast running out of water underneath! 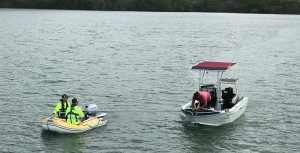 We launched the tender at 16.55 and Kenny and Murray headed off to do the last 400m and collect the tinny. They returned at 17.12 and we found that the tinny had three people on board who needed to get to Whisper Bay.  Yes…more b@#$%y shallows!

After dropping them off and completing the paperwork, we returned to our berth at 17.40 without doing the Drills Training. Thanks to all the crew for a professional job well, and cheerfully, done.